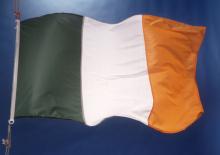 Ireland is the second-largest island of the British Isles, located in the Atlantic Ocean. The Republic of Ireland covers 70,273 km², or about 83% of the island. Off the coast of Ireland there are 83 offshore islands, 23 of which are inhabited. The largest of the inhabited Irish Isles, Achill Island, has an area of 148 km². Many of the islands are much smaller, with an area below 30 km². Ireland has a total offshore island population of 8,756 inhabitants, which corresponds to 0.2% of its population. In many cases, Irish islands do not have their own local authorities but depend on the county level on the mainland. Community development cooperatives play an important role in the administration and day-to-day life on the islands.